One of my long-term projects that I never seem to actually get around to touching is to resurrect Elizabeth Magie’s The Landlord’s Game, the forerunner of Monopoly that was designed to contrast unregulated markets with Georgism, a proposed economic system where everybody is taxed for sitting on resources (primarily land, because this is an old idea), rather than taxing income or spending, to discourage centralized ownership of resources by making it too expensive to resell or rent unused resources. 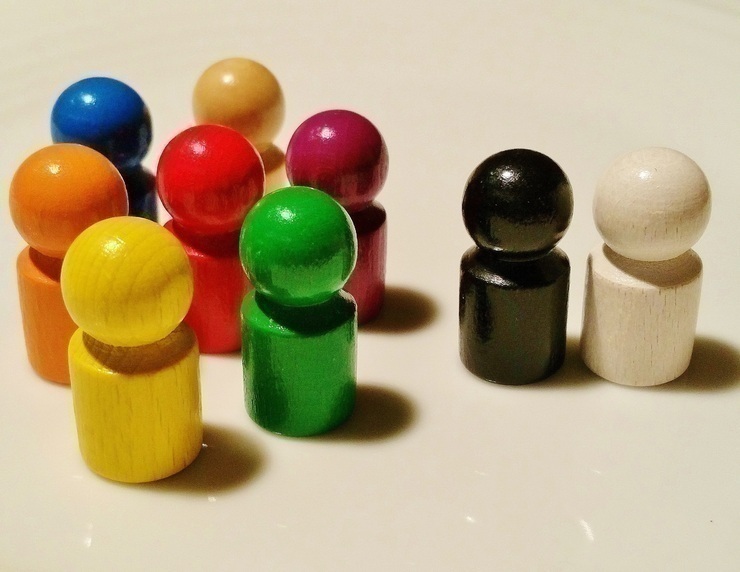 While I wouldn’t be surprised if The Landlord’s Game or Henry George’s ideas showed up, someday, this isn’t a post about any of that.

One of the projects related to the game is imagining what a modern Landlord-like game might look like with additional subsystems, especially the stranger systems people use as house rules. For example, favorite addition to Monopoly in some circles is to replace the jail (where a player is sidelined for some length of time, which isn’t any fun) with a roleplaying-like dungeon crawl, often using TSR’s Dungeon! board game.

While I appreciate the broad concept, I don’t like the implementation of the idea for a few reasons.

Of course, I can solve problems like that, if I want. So, exit Dungeon! and enter…Open Oubliette! Errr…The latter exclamation point is part of the exclamation, not the game’s name.

An oubliette (from the French, “to forget”), is a kind of dungeon that is only accessible through a single trapdoor in the ceiling. The name isn’t terrible and it justifies the idea that the Jail square has an entire dungeon “underneath” it.

What I think I want out of the game is something where we get the combat/treasure/event flow of a fantasy roleplaying game, but without the time spent making strategy decisions or resolving rules. It should also be set up in such a way that, if Open Oubliette (or just Oubliette, informally) is used as part of another game, there should be an easy “checkpoint” that can be used as a winning condition.

I suspect that I can solve the first problem by simplifying fights to one “round” and using cards to define the outcomes. And of course, the game will be licensed CC-BY-SA 4.0. That only seems right.

Since a Jail sentence is (a maximum of) three turns, we presumably want to solve the second problem with some goal that can be reached, but might not be, so that the time spent in the Oubliette might not be useful. If we assume that each roll (just like the main game) involves adding the values on two six-sided dice, that means we want something that takes somewhere in the neighborhood of twenty-one (three, times the most likely roll of seven) spaces. For the prototype, that’ll be twenty spaces (spaces along the perimeter of a six-by-six square), where one square—the Entrance or Exit space—might be considered “inside” or “beneath” the jail of another game.

And we’ll need space for cards, so this gives a board that (in the abstract) might look a little bit like the following. 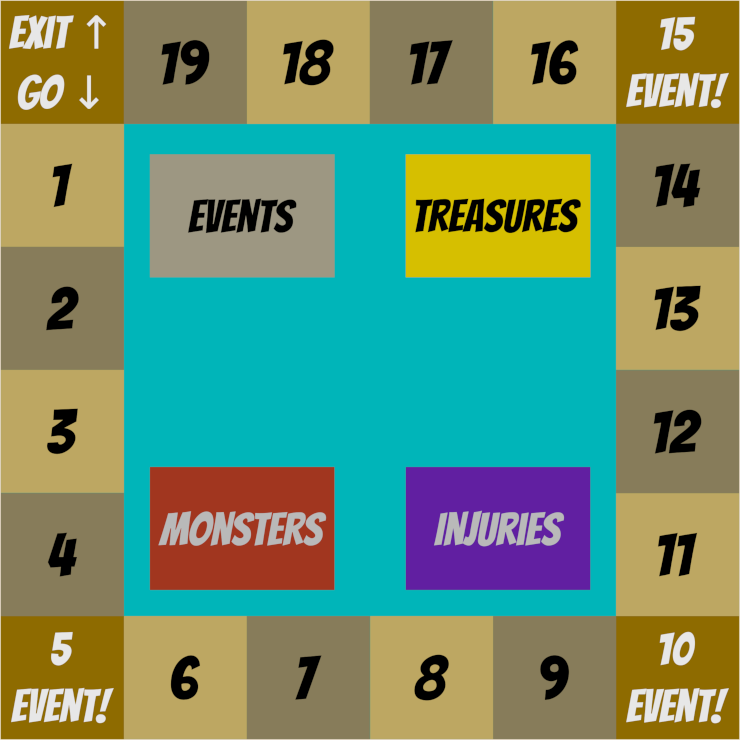 And broadly, we want a fight over treasure with occasional complications that should be at least somewhat interesting. That should give us a basic process. On each player’s turn, the player will:

Fighting the monsters, of course, would have its own rules. As mentioned, this should be reduced to just one attempt, rather than a back-and-forth until someone loses.

The basic flow of a fight follows.

Combat ends here, regardless of the conditions. That was about as simple as I could get it.

However, some Treasure cards—armor or weapons—give the player who holds them the ability to change the player’s attack or defense. Use of the card means that it no longer qualifies as Treasure for the remainder of the game.

Similarly, Wound cards make fighting more difficult. The sum of a player’s two highest Wound cards is added to the power level of every monster the player attacks and added to the roll of any monster attacking the player. Being hurt makes it harder to attack and easier to get hit.

If a player lands on a space where another player is already waiting, the arriving player can opt to attack the other before interacting with a monster with the same rules. The player winning the fight takes three (3) random Treasure cards from the loser, but the attacker will always draw a Wound card to represent damage taken in the ambush. Because of the risks, the arriving player can also choose to not attack.

Whenever a player lands on or passes the Exit space, the player can opt to take a couple of actions that end the turn.

If the player lands on the Exit space, the player also gains the ability to move in either direction, deciding the direction after their roll.

The game is over when one of the two following conditions is met.

First, the first player to cash in a total of $6,000 in Treasure cards at the Exit automatically wins the game.

Second, in cases where Oubliette runs out of unclaimed Treasure cards or where there is a tie in the previous case, the player who has the highest value from cashed-in Treasure cards wins the game.

In the event of a tie in the second case, Treasure cards that have not been cashed in, excluding those being used for weapons or armor, can count towards the total for the purpose of breaking the tie.

If the score is still even, Treasure cards used as weapons and armor can count.

If using Oubliette in place of the Jail in The Landlord’s Game (or Monopoly), make the following changes to game play:

In all other cases, the rules are the same.

Of course, we need those cards, presumably thirty-two of each type. My thinking is that the monsters might be something like this, pushing for some cultural pluralism.

If you’d like to give Open Oubliette a try, you’ll need to supply your own dice (or random-number generator) and playing tokens, but I’d love to hear how it went! My own tests seemed reasonable, but I also don’t play a lot of games, so it might be terrible.

It’s certainly not perfect, by any means—I’d especially like additional monsters to replace the duplicates without digging into the same sources of folklore, so feel free to make recommendations with links—but like I said, it seems to play reasonably well and improvement is why it’s Free Culture! Share your experiences and/or issue pull requests at the game repository, which will be at https://github.com/jcolag/BoardGames by…let’s say Wednesday morning.

Credits: The header image is untitled by an anonymous PxHere photographer and is made available under the CC0 1.0 Universal Public Domain Dedication.