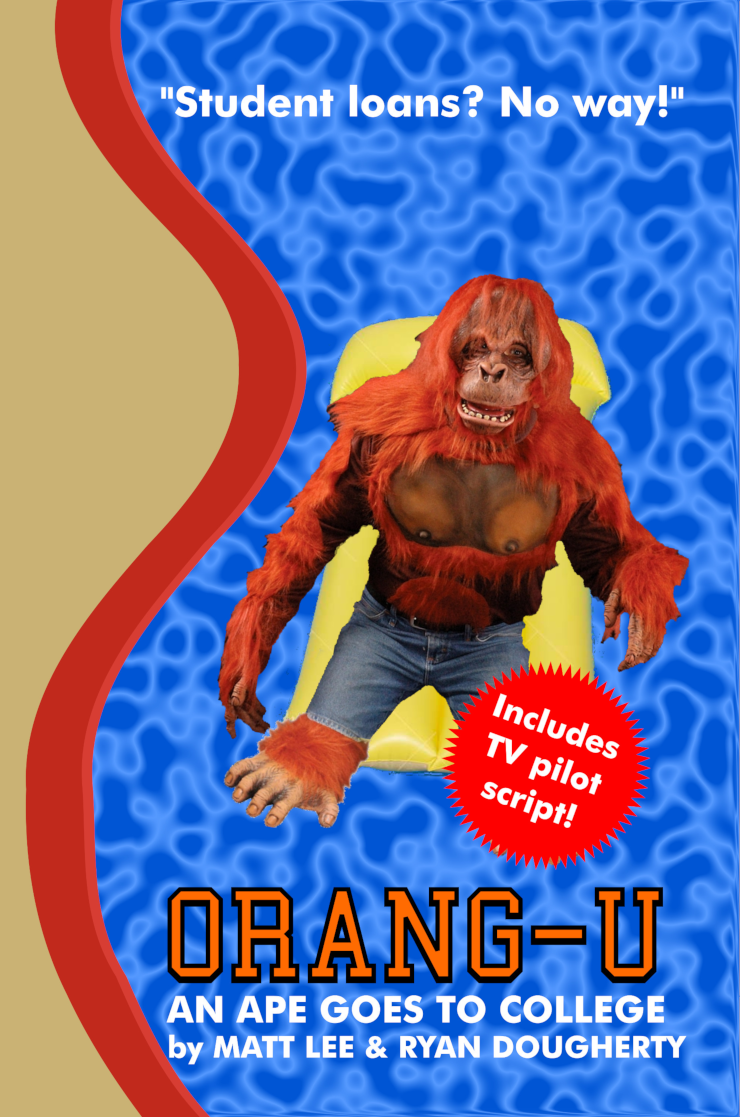 Kicking off our little Free Culture Book Club, we have Orang-U, a short movie that…well, here are just the key phrases from the official plot summary.

One of the great promises of Free Culture (and independent culture in general) is that it provides art that probably wouldn’t survive in a corporate system. Often, it’s disappointing, and we just end up with versions of things we’ve already seen. But sometimes? We get a story where the rich kid sending his pet ape to college in his place is one of the more mundane plot points…

If you haven’t already watched it, here’s your opportunity to catch up!

I did warn you that it had a lot going on.

The setup moves fast and doesn’t quite feel like the exposition it clearly is. It builds the relationships quickly, and they mostly seem credible, despite the sometimes-stiff acting.

The overall story is also extremely ambitious, as mentioned earlier, willing to juggle a shockingly large number of ideas for forty minutes. If you include the pilot script, there are even more ideas; the pilot also tells a much narrower story that’s much darker, but also would have fit in between the two acts.

Also, I criticize the acting and there’s a handful of other quality issues, but for what appears to be a shoestring budget in a movie planned to be released at no cost under a Free Culture license for a few years, this is extremely well done.

Naming the protagonist Scott Peterson (presumably a coincidence and not named for the wife-murderer) hasn’t aged particularly well. As mentioned, the acting isn’t spectacular and a lot of the jokes fail to land, especially where the joke is meant to be edgier.

We also have the improbable situation where June is apparently a full-time television reporter between college classes, with enough credibility to mostly produce whatever stories that interest her. This is all the more interesting, to me, because the (seemingly earlier) pilot script presents her as working at the student radio station, which seems like it would have been a much better fit.

One big problem is the editing, though. Especially at the act-break, it’s hard to get a sense of whether the movie skips over James’s entire college career (and those intervening four years) because it wasn’t interesting or because they wanted to cram the beginning and end of the story and didn’t have time for the rest. That works against the number of elements moving around the plot, since a lot of them seem to come out of or go nowhere.

The novella cleans up a few of these problems, though. The pilot script does, as well, by skipping the first couple of college years and picking up a smaller story already in progress.

Since the release only includes the complete products, I’m not convinced that there’s much that can be done, here. You could re-edit the movie and possibly add some improved special effects, but there’s no additional footage to work with, so any added footage would be jarring. However, there is an intent to use the movie’s footage to teach a course on editing a movie. 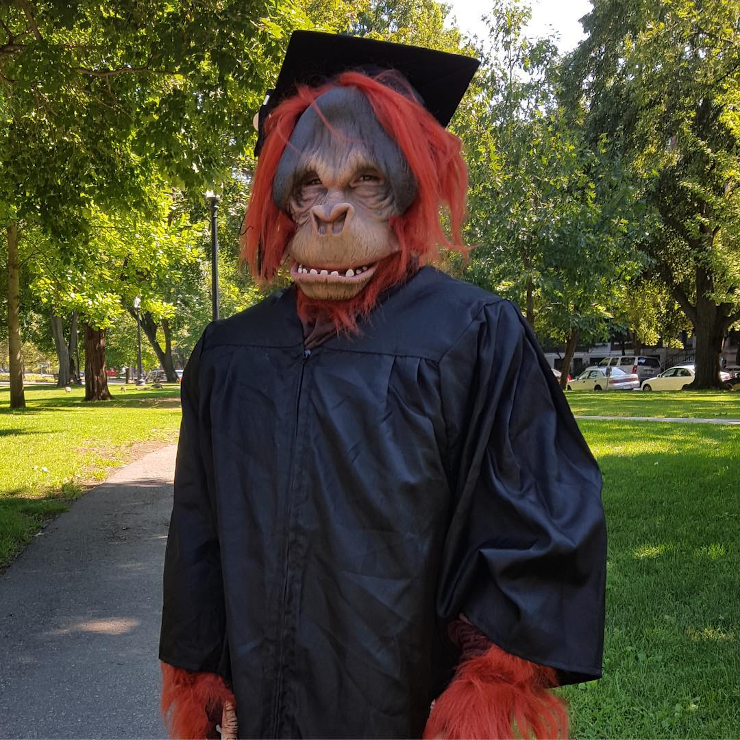 That’s a (minor) shame, since the novella and script has a few ideas that would have smoothed out some of the rough spots of the movie.

The novella and script would be easier to edit, of course. The text is all there and you have the benefit of the other versions.

Allegedly, Orang-U 2: Monkey Business is coming, at some point, though that could easily be a joke or too much of a burden to happen. It’s not hard to imagine such a sequel needing help and being worthwhile.

Especially if the story continues in sequels, it probably wouldn’t make much sense to directly continue the story, but it’s not impossible.

The organizations seem like they’d be very useful to other stories. We’re given exotic animal importer Zoo-Lu, demonic law firm Macmillan & Associates (expanded in the other versions), and college willing to matriculate an ape Newtown College, though there was a Newton College of the Sacred Heart in the area until the 1970s. The novella includes sponsored franchise TV procedural Altoids Law as well as a classic Orang-U sitcom inside the Orang-U universe, plus Patriot-brand cigarettes that are made from organic and sustainably farmed tobacco, which the book connects with Scott coughing up phlegm in that early scene. The novella also fleshes out what Scott and James have turned Zoo-Lu into, between Scott’s “Ghost Emulator” and the connections James has made on the Ivory Coast.

The pilot script has a disjoint set of characters, and also adds the in-universe TV show Asian Christ, about a shape-shifting detective…but I’m not sure how that’s supposed to work and not be horribly offensive.

Despite it never making an appearance in any of the storytelling, the website also suggests that Orang-U’s Boston has a public transit system (the MBTA) that’s haunted. 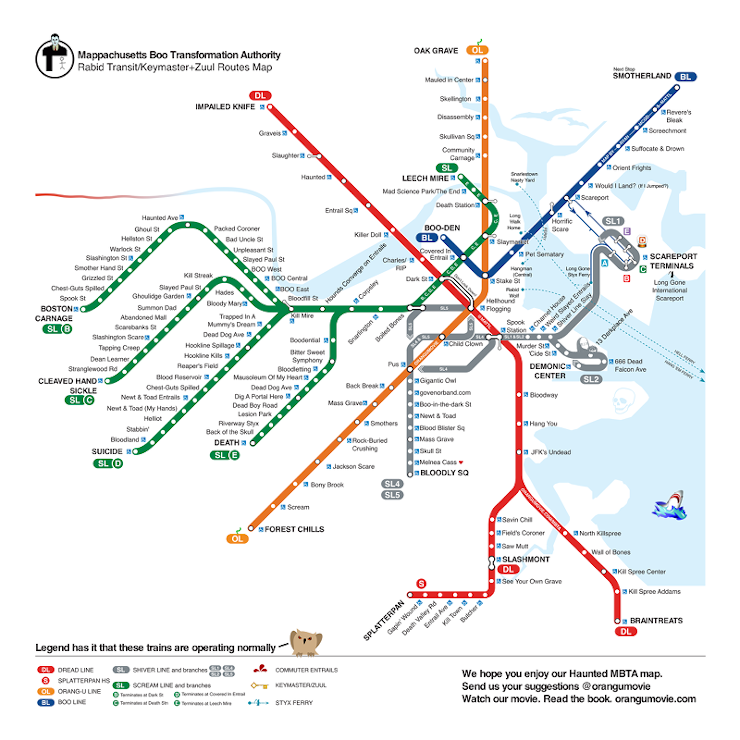 WCVB is a real ABC affiliate, though, and J.J. Foley’s is the actual name of where the crew filmed the bar scenes. Amusingly, the script originally used student radio station WNTN instead of the TV station, but…that’s also a real AM station in the Newton (not Newtown)/Cambridge area.

The pilot script also introduces the self-awareness of the characters understanding that they’re on network television and so can’t curse. That’s probably the source of the running gag about Scott and June not actually having sex.

We’ll take on another movie—this one shorter without any supplemental material—next time, with one of the earliest Free Culture movies, Jathia’s Wager.

Credits: The header image is, of course, the movie’s release poster. The picture of James at his graduation is by Sarah. The MBTA map is on the Orang-U website. All have been made available under the terms of the Creative Commons Attribution Share-Alike 4.0 International License.