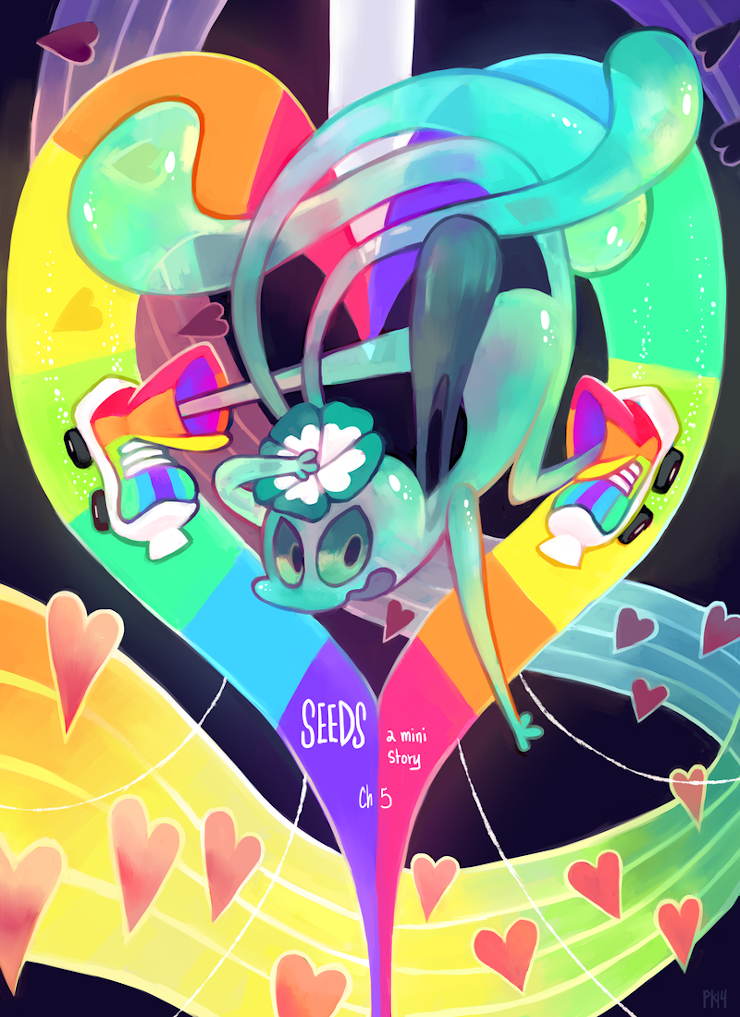 Continuing our little Free Culture Book Club, we have the last third (or so) of Seeds, the first story in the Floraverse.

Unfortunately, there’s no easy way to embed the media, so you’ll want to click through to read Chapter 5 and the Epilogue on your own. You’ll also get a bit of insight out of the Kickstarter campaign video (campaign long over) that recaps a bit, shows a few things that don’t appear in the comic, and…gives Min a voice. There’s also this update.

This post will assume that you’ve read the entire story through.

This third of the story probably comes closest to what I meant in previous installments, regarding this relying heavily on the aesthetic. I love this section, both visually and story-wise. Everything feels confident and purposeful, and we get an emotional resolution.

We don’t see much of the new characters, but they also seem interesting.

If you challenged me to tell you what actually happened in these seventy pages, I’m not sure I could do so successfully. Cress seems to have ended up in Heaven (in the reference pages, those characters are identified as angels), somehow, coming out of nowhere. And there’s the implication of molestation and/or sexual assault. And the seeds vanish, only to go nowhere in the first Kickstarter video. So, I’m not entirely sure how (or even if) that ends the story.

I definitely don’t know how the Epilogue fits in, since it has even less connection to the story than the Prologue did.

Still, it’s a heck of a ride! Yes, even the Epilogue.

I’m going to mostly just repeat what I mentioned for the last two weeks:

As a reminder, there’s a wiki teeing up the possibility of taking the universe in entirely different directions, digging into some corner of the world you wanted to spend more time with, or bring into an entirely unrelated story.

In this case, we got to see Spoke City in what I assume to be Heaven, where we meet a team of angels who each seems to have a unique power. That all seems ideal for transplanting.

Up for next week, it’s time to shift mediums again, is Motherload (sic) an audio novella that introduces the Stardrifter space opera universe, with a bit more than two and a half hours of audio.

While we wait for that, what did you think? Does the last part of the story hold together? Are there directions you want to take the world presented, regardless of whether the Floraverse eventually goes there? Did I miss anything important?

Credits: The header image is Chapter 5’s cover image, made available under the same CC-BY-SA 4.0 license as the remainder of the comic.