This week, our Free Culture Book Club digs into Forgotten, an interactive experience that may or may not be a game. 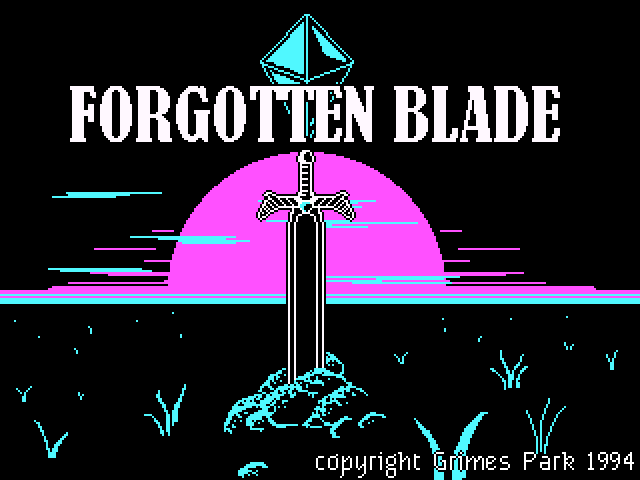 Sadly, Itch.io doesn’t allow for direct embedding, and I’m not in the mood to serve it on this server. So, head over Itch.io’s way to give it a try.

Alternatively, you can install Twine and use it to run the version on GitHub, linked above.

I don’t have much nostalgia for the CGA aesthetic, personally, but the game pulls it off well enough that I can appreciate its use. Likewise, the “game is glitchy, which must mean something important” isn’t my thing, but it’s the core of the short story and works in context.

Obviously, the central premise of a beloved game being played so much that its data files learn enough to understand their situation is old, but well-executed, here. However, this is the first time I’ve seen a variation where the game characters read the game’s own help files to learn the “cheat codes” while accidentally corrupting the game’s memory.

That you get two tries (and really only two tries, though you can delete the in-browser memory to replay, if you’re technical enough to do that) to learn what you can, with no real signalling of how the story is structured, seems like a flaw, even though it was a deliberate choice by the authors. There also isn’t much to do or see, making this feel more like a short poem than anything else.

As mentioned, the repository exists and Park is still active on GitHub on other projects, so it’s not entirely out of the question to collaborate, as long as they’re interested. And if not, you can plausibly learn Twine (it isn’t hard) to extend your own version.

In addition, if you like the game, spend some money on it at the Itch.io page. You can put Forgotten itself in your library for two dollars or grab their bundle that includes two other MIT-licensed products (LOCALHOST and Sonic OC 7) and two commercial products (Arc Symphony and Subserial Network) for sixteen bucks. All five seem like they trade in the retrocomputing theme in some way.

Obviously, the main piece that could be “borrowed” for another work is the fictional Forgotten Blade game. It’s plausible enough that it wouldn’t be hard to imagine a character in another piece of fiction playing it in the late 1980s or early 1990s. Whether that version of the game is also editing itself or just being played, it’s still something that Free Culture doesn’t have a lot of to use.

There are also four characters who, even with such little exposure, have distinct personalities and concerns about “the Hex.” You might not think that they have names, because I don’t believe that I saw their names mentioned. But the image files identify the watery dragon as Hydros, the rocky globe Lithos, the animal skull with flaming eyes Pyros, and the floating object enshrouded in clouds is Stratos.

Next time, I think it’s time for another sub-series. I might regret committing to a full novel, but we’ll start with…let’s say the first thirteen chapters of Manuel, the Magnificent Mechanical Man: A Novel, by Juan-Julián Merelo-Guervós, which I’ve been meaning to read for years and has the virtue of being fairly short. That should come to four posts for the entire novel, each covering around seven thousand words.

You can find the e-book free on Amazon and the source files on GitHub.

While we wait, what did everybody think about Forgotten?

Credits: The header image is Forgotten Blade’s title screen, the game within the game, and as such has been released under the Creative Commons CC0 1.0 Universal Public Domain Dedication.