As you probably know and may have forgotten, Donald Trump, alleged President of the United States, chose to “riff” at his August 10th White House Coronavirus Task Force press briefing, suggesting that the Spanish flu pandemic (February 1918 – April 1920, though he insists that it’s a 1917 epidemic) ended World War II (1 September 1939 – 2 September 1945). 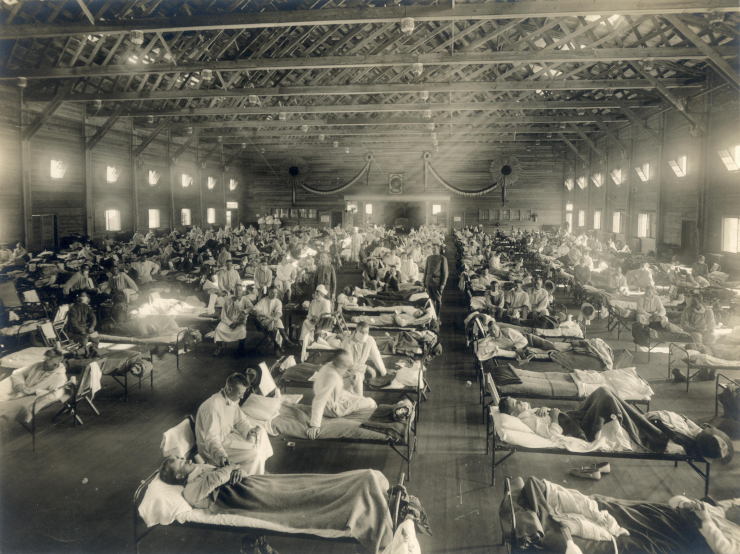 This is, of course, senile nonsense from a deeply ignorant man. But it’s been nagging me that there’s a really fun story in that stupid narrative about an illness stopping a war that hadn’t even started thirty years early.

So…I wrote Grandfathers, Butterflies, and Patient Minus-One. I don’t think it’s as fun as I wanted it to be—probably because the leading roles are fascists and tens of millions of deaths aren’t particularly funny to joke about, even a century later—but it might be a decent starting point for someone’s more ambitious version of the story.

I’ll add some quick notes after the story.

“Hirota, are you sure? Wahrheit?”

“The recorder has passed through and returned mit images of the past.”

“Hōfuna! We will be wealthy beyond our wildest dreams! Matsu, is this all ours? You took nothing from nobody?”

“Natürlich, all the work is mine. I let the houseboy work some of the mathematik, but he has no property rights, sō janai?”

“Yes, sir, it is true that property may not own property.”

“Indeed. And…ten years and I still forget your name, boy.”

“The officers instructed me to answer to the name Paul.”

“Well, then, that will be all. You may return to your usual duties…Paul.”

“You should not abuse es that way. Allowing es to calculate numbers could void the warranty.”

“Ach, we should meet Rikugun-gensui Takuya Tomomori, who created the modern era.”

“Ist wahr, der Hauptführer and Taitei—may they continue their never-ending battle and conquer the afterlife for us—did much to shape the political world, but without the honorable Field Marshall, it’s said that nobody else had the vision or ability to steal the American Genbaku and ensure the world would only revolve around the right Axis. To see him in his prime…”

“Before he joins the service? Ikou!”

Right, it probably would be better to just auto-translate to English, rather than deal with Niklas and Hirota trying to speak Japanese.

“You are from…the future, then?”

“This does not surprise you, great sir?”

“I have only just been accepted to His Imperial Japanese Army Academy, and I am familiar with scientific romances. You are also dressed like space-men with your multiple layers and this folded jacket. But I would like you to prove it.”

“What do you think, Hirota, the memorial back home?”

“This is magnificent! Is it all for me?”

“Not entirely, no. The Flint Museum of Honor and Sacrifice includes exhibits covering the entire Glorious Global Revolution, but we would not have been liberated without your work.”

“Liberated? Where are we? No longer in the Great Empire?”

“We are in what was once called Kan-shaw. Kansas? Of course, English still needs the French purged from it. We are what was once the United States, now a small part of the Unified Earth, with administration handled from this geographic center.”

“Astonishing. And that…that is me? I always thought I’d be taller. And have more hair…”

“No, don’t read it to me. I would hate to be accidentally forced into a duel to the death with my grandfather.”

“A joke…about moving through time? Never mind. I was warned about Western senses of humor. Knowing too much about the future could disrupt it. As Fichte says, you could not remove a single grain of sand from its place without thereby, changing something throughout all parts of the immeasurable whole.”

“That’s very wise for such a young man. Let’s put the wise one back, before the world notices he has gone.”

“Oh, dearie-my, how odd is that? It appears that the masters dropped the control unit. A shame. I probably should have carried the one, when calculating the dimensions of that panel. They will figure it out and build a new one, if I am too obvious. Not an original thought between them, but they can build a new control unit.”

“Where have they gone, Paul?”

“The numbers show that they have been to Japan, 1917, and come back to modern-day Kansas, just up the road, probably the museum. They are in transit back to 1917. I suppose it would not hurt them too much to stay in Kansas. Maybe stop them short by a year. The great Field-Marshal could enjoy the diversion, before they go back on their way.

“I have been forced to work with plenty of these Nazi-types, and not a one of them was half as smart as they thought they were.”

“No, the panel says we’re still in Kansas, and 1918 instead of 1917. The control unit is missing, meaning that damned Paul must have removed it. I’ll have that thing destroyed for this, when we get back!”

“Right, I can see the sign for Fort Riley. We’re not far from where our lab will stand.”

“Are we stranded? If what you have said isn’t just an elaborate prank, this could derail the future to your time. Then, what happens to us? Do we fluctuate between timelines where you do and don’t exist to create the time machine, succeeding and failing to pick me up, and so changing and preserving the timeline? Fighting my honorable grandfather to the death isn’t my goal, I tell you!”

“Settle down. We can build a new control unit. We will need local money, but I can build an electromechanical version of the missing unit with the current technology. The principles are the same, but with—”

“No need, we’ll trust you. I assume that it doesn’t matter if we change the future, here. Just about everybody here will be dead or in chains, soon enough. Just avoid the soldiers.”

“Fair enough. I’m already drawing attention. They have clearly not seen many warriors from Japan.”

“Indeed they have not. You may wish to stay out of direct sight.”

“Finally. Squatting in this basement has been wearing on my nerves. To not see the rising sun for months has made my bones ache and boils my blood…”

“Yes, yes, you’ll be able to clean yourself up soon. At least you didn’t need to re-invent entire fields of electronics with ancient technology.”

“I’m glad to finally be rid of that damned teenager. Now to send Paul back to the manufacturer for discipline.”

“Hirota, this isn’t the lab. We’re in some sort of monitor chamber. On the screens…is that the idiot used car salesman? Why is his skin orange? He’s talking. Maybe we can find out what’s going on and where the lab is, if we can get the sound.”

…closest thing is in 1917, they say, the great pandemic. It certainly was a terrible thing where they lost anywhere from 50 to 100 million people, probably ended the Second World War.

“Oh, no. Niklas, the United States didn’t fall. This computer seems to have an extensive database and fails to mention Takuya Tomomori, except as an early victim of the Spanish flu in Okazaki, which…”

“Our world, destroyed! And the only hope for our way of life safe from tyranny of the majority is…that sleazy con man? A goldbricking blotto on the make with his own kin? What kind of hellhole elects such a worthless clod?”

“Maybe he’s not such a simp, here. He seems to know that we accidentally introduced the Spanish flu to Japan in 1917, after all.”

“Freeze! Trying to rob the store before we open? Stop touching the electronics. You break it, you buy it. Not even wearing a mask? Stay back, or I’ll pepper-spray you.”

It lacks something, but the general shape of what I wanted is there. Despite being set up as a plot point at the start, for example, Paul comes off as a deus ex machine instead of the hidden protagonist, and the story doesn’t really end. On the other hand, where I tend to be more narrative-heavy, I tried to cut all but the most essential prose out of this, so that it’s mostly dialogue.

But as for the structural bits, the names were all randomly chosen, though Niklas and Hirota—plus their dialogue until I explicitly state that we’re reading a “translation”—were meant to evoke a joint German and Japanese influence on the language. Paul wouldn’t be a “slave,” because slavery would be considered some barbaric tradition, but he’s definitely forced labor who was born and raised in a “factory prison,” with his humanity dismissed as if he were an industrial product, as an exaggeration of for-profit prisons.

Tomomori would have been one of the youngest Field-Marshals of Imperial Japan. His home city of Okazaki would have only recently been declared a city when the time-travelers first visit him.

Much of the travel centers on Kansas, particularly near Fort Riley, because that’s where the earlest cases of the Spanish flu seem to have been recorded. As a twist, Manhattan County, where Fort Riley sits, is currently one of the minority of counties in Kansas mandating that people wear masks for the duration of the COVID-19 pandemic.

Credits: The header image is Emergency hospital during Influenza epidemic, Camp Funston, Kansas - NCP 1603, from the Otis Historical Archives, National Museum of Health and Medicine and in the public domain based on its age.