This week, our Free Culture Book Club digs into Pentagon, the debut production from The Hill Productions, “a no budget, DIY, independent film production and distribution company.” 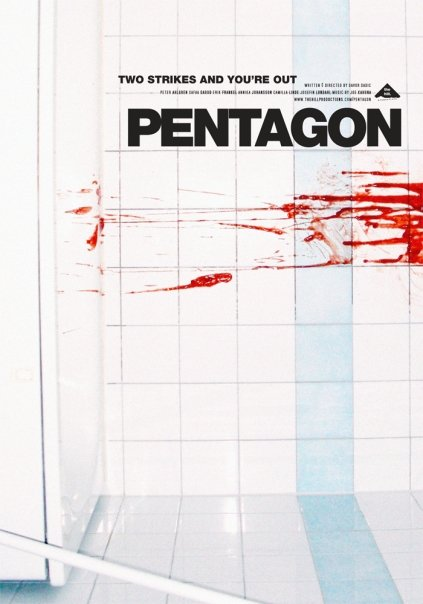 This is how The Hill Productions describes Pentagon.

A group of left-wing activists, rebelling against all and nothing, are holding a pair of right-wing fanatics hostage. An unfocused hit man is, sort of, hunting them down. It all ends in lots of blood without any obvious reason. At the end of the day it’s all about as politically incorrect as possible. Sort of…

So, this could go in any direction, really, but here’s your chance to watch it, if you haven’t already.

It’s in Swedish, so you’ll probably want to turn on the subtitles. Or you could learn Swedish. Who am I to tell you what to do, dear reader? The blog post will still be here when you’re done.

I don’t know what I was expecting, but this wasn’t it…

The most obvious aspect is that the movie is surprisingly fun despite so little happening, and at least some characters are well-drawn, even if they’re obviously all campy stereotypes. A couple of the jokes even work across the language barrier and a dozen years later.

The idea of a protest over the price of fast food salads leading to a double kidnapping seems more than a little far-fetched, and we never get any explanation for it. In fact, because our pseudo-socialists are painted as petty, it’s unclear who hired a hit man, and the only evidence we have of the fascists is as victims and martyrs, the movie seems to almost take a pro-fascism stance. I don’t think that was the goal, but it feels like the narrative is there to show the socialists as shallow and ineffective.

Also, the movie has a shockingly slow pace, with far too many extended scenes of someone walking through a washed-out background. I’m willing, in 2020, to accept the characters walked to wherever they end up, and don’t need to physically see the movement. Some of that space could have been given to explaining the scene where someone washes something off their face. Is it blood? Jam? I may have missed something, but don’t know how it got there.

There don’t seem to be any ways to get directly involved. There was once a Flattr account, but the link is currently dead, the most recent release was in 2016, and Flatter doesn’t provide a way to search for creators. I also don’t see anything like source footage or a script, which would make it difficult to modify or update the story other than redoing existing work.

Say what you will about them, but I think that Red Faction 69 are charming and could stand more attention, especially given that 2008 ended in a financial crisis, which spawned the Occupy movement and provided an excuse for fascism to get a new foothold in society. So, while the group we see doesn’t get names, it would be interesting to see how twelve years of real problems has changed them, and whether a now-college-aged Isaac has grown into a stronger role.

In theory, the Man in Black would similarly be useful, but without a name or background, he’s just a hit man who asks people for directions as part of his process.

Next week, we’ll dip back into comics with Virtuoso, by Jon Munger and Krista Brennan, a proposed series that never went anywhere.

While we wait, what did everybody think about Pentagon?

Credits: The header image is Pentagon’s movie poster, released under the same terms as the movie itself.