This week, our Free Culture Book Club watches the second quarter of the episodes of Where Are the Joneses, an early scripted comedy web series. 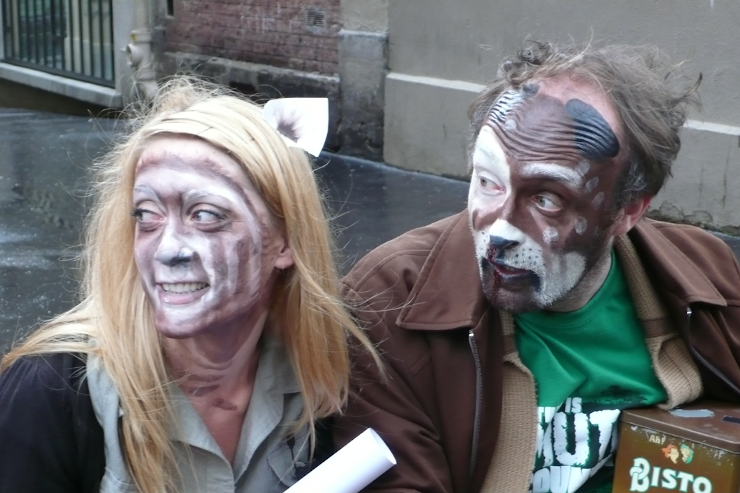 If you haven’t caught up, here’s the twenty-fourth episode to get going on this batch.

The first few episodes of this batch are my favorites so far.

The twists with the Logg and Jambaneaux stories are distinct and have twists that I found funnier than I expected, despite having watched the series before. I also love the “tortilla wrap board” and the composite image.

Probably the most “important” aspect of these episodes, though, is that Ian becomes a more fully realized character instead of just a stereotypical anxious “straight man” for the hypothetical comedy act. The character takes some initiative and has conversations where he’s an active participant rather than passively reacting, which gives a better feel for who he is.

Overall, even though we’re only talking about a difference of two months between the release of the first episode and the release of the episodes covered here, the production value seems much higher, both in terms of the writing and (maybe especially) the audio quality.

The episode that’s mostly Ian farting was admittedly inevitable, but doesn’t exactly represent the show at its best, of course. I’m also not entirely convinced that the corporate buzzword episodes add anything to the story, since they don’t change the status quo significantly or come to some obvious punchline. It almost seems like they were written to introduce the label-maker used in the logo, but if so, it doesn’t do a great job of it.

And again, a few individual jokes just don’t come across, at least for me. It’s not helped by the longer episodes, where I don’t think that the show’s structure is able to manage awkward humor. For example, the whole discussion of Snowy’s death feels like a series of jokes wedged in with no other purpose than to be vaguely distasteful. Distasteful humor is fine, but it still needs to be funny and part of the narrative.

Speaking of Snowy, it seems strange to give a family a surname that either translates to or merely sounds like the word for grasshopper without it being relevant, somewhere.

As mentioned last time, there probably isn’t any likely involvement, anymore. The show ended more than thirteen years ago and the only evidence of it remaining is on third-party servers, like the Wikidot forum linked above and their YouTube account .

I have not checked the Facebook community, but I assume that has fallen into disrepair, as well.

These twenty-three episodes primarily supply us with new siblings Roger Logg MEP, Jean Jambaneaux (impostor and real), the late Snowy Saltamontes, and her mother Angel. Madrid Live —a real show, hosted by the equally real Ann Bateson—also refers to what seem to be fictional athletes. We also know what “Mr. Jones” must look like.

Next time, we continue on with the third quarter (twenty-four episodes) of Where are the Joneses?, from Jonti’s Dilemma (#47) to Family Emergency (#70), as the Jones family reaches further. If you reach Breast Reduction at 14, you’ve gone too far.

Credits: The header image is Dawn and Ian painted faces by The Joneses, released under the terms of the Creative Commons Attribution Share-Alike 2.0 Generic license.