This week, our Free Culture Book Club watches the third quarter of the episodes of Where Are the Joneses, an early scripted comedy web series. 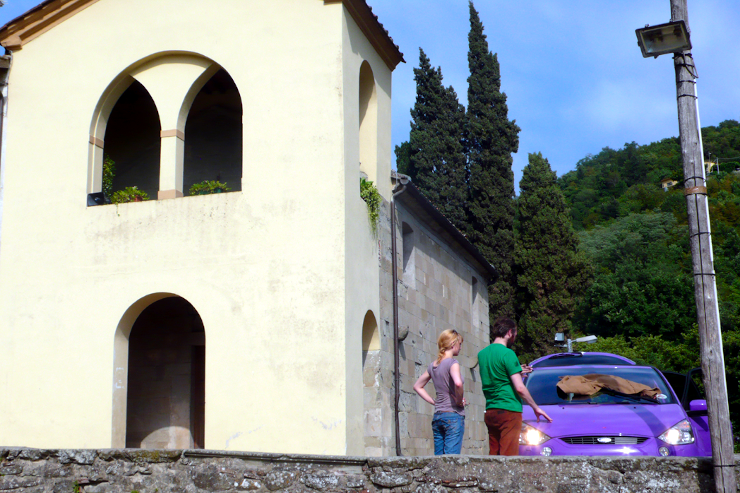 If you haven’t caught up, here’s the forty-seventh episode to get going on this batch.

We bid a fond—or maybe not so fond—farewell to a couple of characters, while hearing more about Ian’s background.

Despite my complaints (below) about the strange gang story, the tension that builds to the introduction of Roy is clever. And through that sequence, we got a little insight into Ian’s former life, and it’s nice seeing Dawn (mostly) admit to caring about him.

Ian literally singing about the great food of Italy, only to end up eating at a drive-thru window, probably hits close to home for a lot of viewers.

The awkward change from Jonti to Michael is surprisingly funny, too, and Michael’s attempts at narration. And I admit to liking the “teeny Eanie hammer.” Plus, “Zzabur Cerebus” might be my favorite made-up name.

This may just be a matter of taste, but the crime story felt contrived to me, and the fact that it runs for almost ten episodes—nearly half of this batch—seems like a significant investment for one joke that doesn’t quite go anywhere.

Also, the outdoor audio quality is strangely spotty for this run, though not in areas that affect the plot substantially.

As mentioned last time, there probably isn’t any likely involvement, anymore. The show ended more than thirteen years ago and the only evidence of it remaining is on third-party servers, like the Wikidot forum linked above and their YouTube account .

I have not checked the Facebook community, but I assume that has fallen into disrepair, as well.

In this set of episodes, we meet Carston Whelk, someone’s baby, Roy, Michael J. Knight, Eanie Mancini, and even some history for Zzabur Cerebus.

The—I believe unnamed, though it appears to start with an A—Italian fast food drive-thru, with such lovely menu items, needs to spread around the world…even though few of the words are actual Italian.

And I’m admittedly interested in Dawn’s version of role-playing games, with elves who have super-breath; statistical information like royalty, sense of humor, and star sign; and wars solved by kicking opponents into goals.

Next time, we polish off Where are the Joneses? with the final quarter of episodes, from Breast Reduction at 14 (#71) to Mr. Jones (#92), as the Jones family heads into the home stretch of their first (and only) season. If you reach the out-takes…feel free to watch them, too. Will they cram in all the other siblings? Will the story return to Cherry Lodojo? We’ll find out next week…or whenever you decide to watch.

Credits: The header image is Car wash by The Joneses (and slightly modified by me), released under the terms of the Creative Commons Attribution Share-Alike 2.0 Generic license.