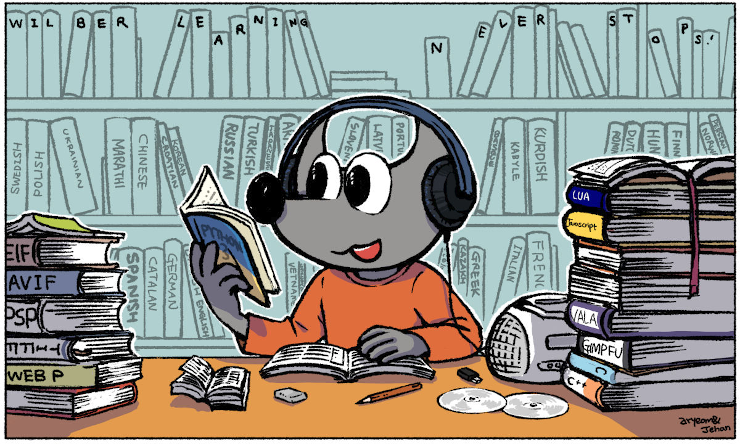 It was recently brought to my attention that the GIMP Team has been attaching a comic strip with release announcements. Unfortunately, it’s a relatively new addition, so we don’t have a huge body of work to draw from. But it’s also nice to have an occasional work that can be taken care of during a snack break.

GIMP is an acronym for GNU Image Manipulation Program. It is a freely distributed program for such tasks as photo retouching, image composition and image authoring.

I use the software routinely, to clean up the images on this blog. It’s pretty good, especially since they decided to move the entire program into a single window.

Wilber is the GIMP project mascot. He’s an anthropomorphic coyote. I couldn’t find a page discussing the history, so unfortunately, I don’t know why he’s a coyote, just that he is.

We may have the opportunity to revisit the project’s work in the future. Although after at least nine years “coming soon,” and all communication channels seeming to just talk about GIMP, I’m not entirely convinced that we’ll ever see ZeMarmot. Maybe one day, though.

Something that I didn’t initially care about, but stuck with me and, in retrospect, feels genuinely special, is how the comics blur the line between Wilber’s “real world” and his use of the software. That is, we see him use GIMP in front of a computer, and we see him painting with a literal paintbrush and canvas, and updating the software gives him new abilities to use when painting. It’s a clever conceit that I didn’t expect, and I don’t think that I’ve seen it presented in quite this way.

The idea of the various Free Software mascots living out in the world and interacting with one another is probably a bit obvious, but is still at least mildly interesting.

There are several strips that I simply don’t understand, even with the context of the blog post available. The meditation comic, for example, doesn’t seem to have any significance, and I’m not even sure why someone would meditate in what looks to be a crowded room of characters that I can’t identify.

Speaking of unidentified characters, the conference call comic shows many mascots that I can identify—Blinky, Puffy, Tux, Wilber, the gnu, Beastie, and Konqi—but there’s also a bunch that almost seem like they were meant to be placeholders that were never replaced with real mascots. The monkey has a Blender logo, so I have to assume that there’s some connection that I’m just not aware of. The fox is maybe intended to represent Firefox, even though Mozilla would probably make more sense. I can’t even imagine who the lady goat(?) with the glasses is supposed to be.

One comic out of the twelve has had a collaborator, and it was the first one. I also don’t see anything like a repository, with the comics only accessible at this time by going through every blog post. So, I’m guessing that this is personal project without much room to get involved in the comics.

The GIMP Project, however, has an extensive list of ways to participate in the project. They also accept donations through just about every route.

I don’t see much, other than the broad concept of Wilber being able to use GIMP’s features in the outside world; presumably, that could be extended to all Free Software mascots having special abilities related to the software’s features. Of course, the fact that Wilber is a trademark of the project, like any mascot, can make usage of the character difficult.

Oh, I suppose that the idea of Santa Claus checking in on households through video calls to “deliver” digital gifts might also have some potential beyond the pandemic, as well. It’s not hard to imagine extending this to a future where stepping out of a video call replaces coming down a chimney, given how few people have fireplaces.

Next time, we’ll play The House, an adventure game by Artur Kot.

While we wait for that, what does everybody else think about Wilbur & Co.? There obviously isn’t much too it (yet), but I can see where it could become something that gets collected on its own.