Today is both the European Day of Remembrance for Victims of Stalinism and Nazism and the International Day for the Remembrance of the Slave Trade and its Abolition, mouthfuls that represent the lives lost to some of the most vile (and stupid, if we’re being brutally honest) regimes in history.

If nothing else, let’s all at least strive to reduce the number of times we accept that authoritarianism and inequality are just the best ways to get things accomplished. It’s never true. And if we can get away from that myth, we can cut the frequency that fans of these regimes keep coming back.

The good news is that the styling for Fýlakas Onomáton is basically now complete. While it isn’t always pretty, it’s serviceable and never looks too bad. 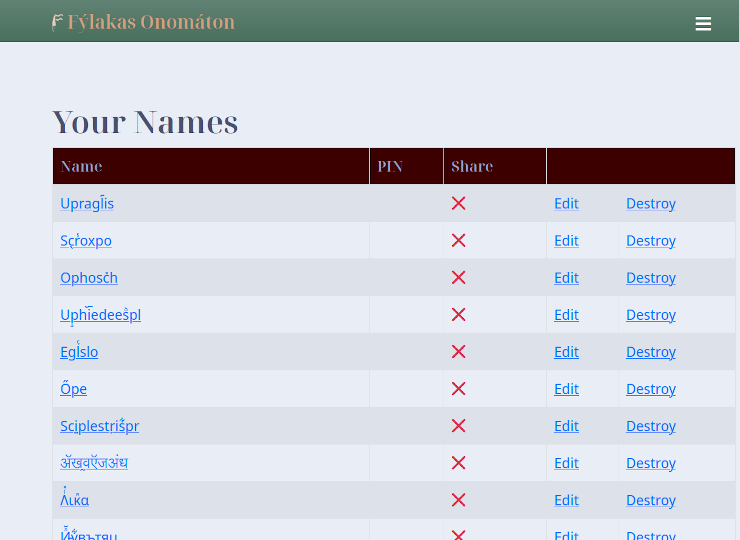 There are a couple of features roughed out, like the ability to share, that I haven’t bothered to finish, because I don’t think they’re needed for launch. But other than those, it’s ready to go, so I also started the work of making it possible to deploy the server to Heroku. Ultimately, I decided that I didn’t want to spend any money every month on a server, for this experiment, so it was either something like Heroku or dumping it onto a server that’s already running something else. That said, Heroku is pickier than I expected, with specific databases and versions of Ruby required.

I didn’t feel like doing anything involved on Sunday, in case Henri disrupted my attention, so I took care of an update each for Uxuyu and Bicker, since they only had one apiece at the moment.

Once I get Fýlakas Onomáton running on Heroku, I’ll start pushing out more library updates to other projects, since—as I’ve probably mentioned for the last couple of weeks and hinted above—they’ve been piling up.

Credits: The header image is Black Ribbon, by MarianSigler, made available under the terms of the Creative Commons Attribution Share-Alike 3.0 Unported license.