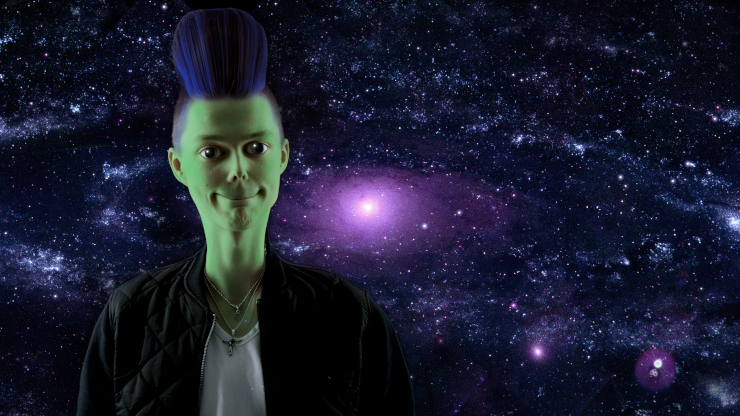 In old science-fiction, the acronym B.E.M. refers to the old, bland trope of the bug-eyed monster style of alien design.

Captain’s log, stardate 7403.6. The Enterprise is on a series of exploratory and contact missions. Traveling with us as an independent observer is a member of a recently contacted alien species, Honorary Commander Ari bn Bem. He’s from the planet Pandro in the Garo VII system. We have taken up orbit around Delta Theta III, a newly discovered class M planet. A previous scouting mission has reported possible aboriginal life forms here, and the Enterprise is to investigate and report.

Pandro might be a reference to movie producer Pandro S. Berman, who worked from the late 1920s to 1965. Garo, assuming that’s the intended spelling, could refer to any number of things originating from almost anywhere in the world. It could also be a combination of the prefix pan- and the prefix andro-, to suggest Bem’s physical nature as a colony creature.

Oh, and since this episode doesn’t have much of a cultural aspect to it, I may as well use the space point out that the Bem character strikes me as extremely problematic. The first name Ari, the bn prefix for whatever Bem’s last name represents, Pandronian self-proclaimed superiority, the character’s status as a perpetual outsider who can’t manage the basics of society, and questions about his loyalty and lack of courage strike me as strongly anti-Semitic. I assume that it’s an accident: Episode writer David Gerrold is Jewish, after all, and has fought to use Star Trek to support progressive causes. But it still definitely doesn’t line up well.

KIRK: Sensors report several groupings of aborigines. They may be dangerous. So I want all of us to avoid any unnecessary risks. But these monitoring devices have to be planted. Lieutenant Uhura will be tracking us throughout. Now, if there’s any trouble of any kind, beam up immediately. Don’t try to be a hero.

The “monitoring devices” bit seems to imply that someone in the Federation actively spies on pre-technological cultures.

It’s maybe notable that Uhura is in command, for this scene.

KIRK: I am Captain James Tiberius Kirk of the starship Enterprise. This is my first officer, Mister Spock and honorary Commander Ari bn Bem of the planet Pandro.

Kirk has a middle name, named—directly or not—for the second Roman emperor.

KIRK: There are times, Mister Spock, when I think I should have been a librarian.

SPOCK: The job of librarian would be no less challenging, Captain, but it would undoubtedly be a lot less dangerous.

Not to nitpick, but I’d like to point out that, the times we’ve seen libraries, such as The Lights of Zetar and All Our Yesterdays, they didn’t seem like particularly safe places…

SCOTT: I think he said ‘maybe’. Well, that convinces me. Ready a security squad. We’re going down there. Issue phaser rifles.

It certainly didn’t take long for Scott to plan a massacre of a primitive society.

KIRK: It is necessary. Not only for them, but for us as well.

We’ve seen evidence of this behavior before, in episodes like The Menagerie, where the Federation encounters a more powerful civilization and places it under absolute quarantine. Contrast this with their behavior on encountering less developed civilizations, where it’s fine to interact with and even spy on them.

We find the adaptation for this episode as Star Trek Log Nine. The final four books of the series only cover one episode apiece. This book also wasn’t available on the Internet Archive, so I bought what was billed as a ratty copy of this one, and the succeeding book for The Slaver Weapon.

This version of events, interestingly, follows directly from the events of The Eye of the Beholder, starting out by dropping off the team we met there.

With all the ship’s operations functioning smoothly, he was able to lean back and relax slightly. The small portable reader screen set into the left-hand chair arm was playing back the half-legendary story of how one Matthew Jeffries first conceived of the Constitution Class vessels, of which the Enterprise was but one of many now.

The half of the legend that’s true is Walter Matthew Jefferies, set designer on Star Trek. In later installments of the franchise, the narrow maintenance tunnels in the ship are referred to as “Jefferies Tubes” in his honor. The term was apparently in use during the filming of the original series, but never made it to an episode.

This might be the first reference to the Enterprise being a “Constitution Class vessel,” too. We might hazard a guess that the Constitution is the “NCC-1700” ship listed on the screen in Court Martial, but the name hasn’t been used in a script, to my knowledge.

Also, I’m going to assume that this is just sloppy editing on Foster’s part, but it’s possible that he really did intend for a world where portable electronics are built into chair arms, thereby rendering them less portable.

If I’m not mistaken, this episode gives us Kirk’s middle name. We also learn that Matt Jefferies has transcended the bounds of our reality to have also designed the real Starfleet ships that we see.

This episode tells us that part of exploring the universe is actively monitoring and spying on pre-industrial societies. It’s important enough that someone tasks the Enterprise with planting the devices, even sending oversight to see how the job is accomplished. These societies are also considered somewhat disposable, to the point that an officer can order sending armed troops into a city without that order triggering an inquiry or other attempt to stop it.

By contrast, if a novel society has more power than the Federation, then the Federation’s goal is to isolate them from the rest of the universe. The implied politics seem to be that the Federation needs to be seen as the most powerful organization in the galaxy.

Next up, we’ll soldier on with the adaptation of this episode and visit Pandro, in a story that I’ll call Tam Paupa.

Credits: The header image is untitled by an uncredited PxHere photographer, made available under the terms of the Creative Commons CC0 1.0 Public Domain Dedication.