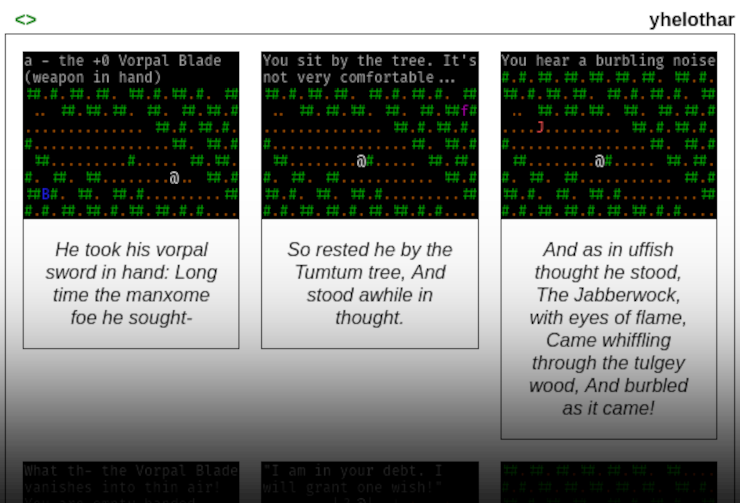 If you’re not familiar with Nethack, that’s an—probably the most famous—open source “Rogue-like” game started in 1987. It tries to mostly act like an improvised fantasy role-playing game, and after thirty-five years of development, generally has a special rule for just about any peculiar situation that might arise in the game.

Given modern technology, the game is probably most notable for being entirely text-based, similar to what we saw in A Dark Room or the default version of Cataclysm: Dark Days Ahead, where colored letters and symbols represent all the various in-game objects.

Since this comic has been around for thirteen years, rather than try to read every strip, we’ll instead just cover the strips that hit the site’s top-ten lists: Most viewed, highest rated, and most commented.

We can start with the obvious: One of the more interesting aspects of Free Culture, which I occasionally bring up in the negative, is reproducibility. That is, while we’re allowed to share and reuse the works that we’ve discussed, in whole or in part, it’s usually difficult to do, because we lack access to key resources or skills. It’s non-trivial to draw in the style of a specific comic creator or hire an amateur actor who only really appeared a decade ago. By contrast, Dudley’s is “drawn” with text, such as the following, which is fairly straightforward to modify or stylistically replicate.

Likewise, because they’re text-based, the comics are (relatively) accessible by just about anybody. I mean, someone with a visual impairment would need a screen-reader that “speaks Nethack” to understand them, for example, but I believe that exists.

The website code doesn’t seem to have a license attached to it, unfortunately, but it even hosts a tool to create comics.

Some jokes at least try to have multiple layers, with a surface joke that doesn’t require knowledge of Nethack to make sense, then potentially bolstered by the joke working on another level in the game’s lore, and possibly including elements in the pictures that have implications for the joke. It’s rare, but that sort of writing is also difficult.

As above, we have what will be an obvious issue for many readers: The “art style” relies on the text representation from Nethack, which demands some familiarity with the meanings of dozens of letters and symbols in a variety of colors.

Similarly, many of the strips just translate content from elsewhere into a Nethack-like form. Not only does this need the reader to be familiar with whatever obscure comment that Reddit cared about ten years ago, but it may present a licensing problem for purists, since the comic is adapting something that is not Free Culture, without permission. Likewise, many strips are just references to other things.

Despite my comments above about style, the writing is wildly inconsistent, with the worst generally having the joke explained in depth in the title.

While it’s unknown how frequently the site updates, it’s still possible to create and submit new comics to the site. Each comic also has a decently moderated comments section, where people discuss the comic.

I’ll point out, though, that the community seems…unfriendly, with strip authors getting angry when a reader doesn’t understand a cultural reference that underpins their joke.

There’s a vision of Nethack, here, where the various characters and monsters act like they’re in a sitcom, in the moments between turns, when the player isn’t paying attention.

As mentioned, there are many references in the assorted strips, but many of them are references to properties that are not Free Culture. You’ll need to do your own research, if you’re interested in them.

Next week, I’m going back to books to celebrate having read (by then) the last of the Star Trek books of relevance for Thursday posts, so we’ll read Dünnes Eis (Thin ice). The good news is that it’s short. The bad news is that it’s in German, and I don’t read German, so this should be an adventure, and I apologize in advance for the results. We’ll cover the first half of the book, through Datenbewegungen (Data movements). If you start reading Kuchen auf dem Küchentisch (Cakes on the kitchen table), then you’ve gone too far.

While we wait for that, what does everybody else think about Dudley’s (New, Improved) Dungeon?

Credits: The header image is a (partial) screenshot of a comic, and so available under its license.