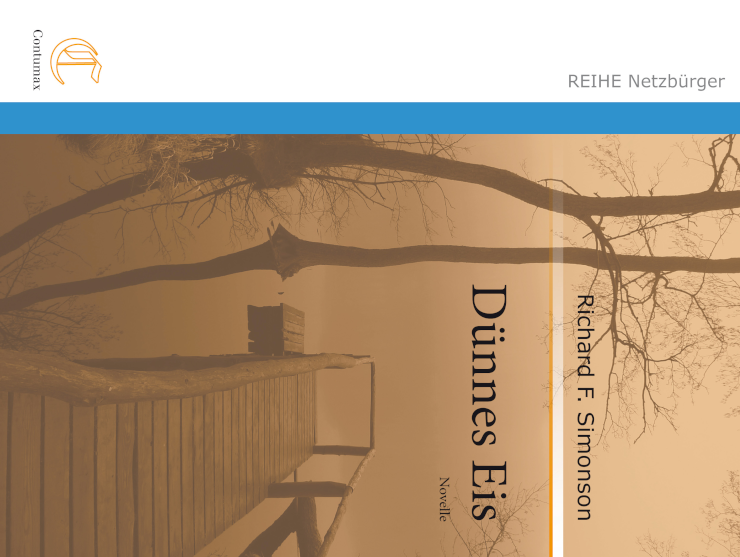 V. is a man who has everything and wants to do everything right. He bears responsibility and is aware of it. The key role it plays in shaping our new, networked society puts it to the test.

A novella about the Federal Republic of Germany at the beginning of the 21st century.

The title itself translates to Thin Ice.

Once again, as a quick word of warning, this book turned out to definitely not be my cup of tea, so there’s the possibility of my being unfair to it. The story is built almost entirely around what I’d call the overly theatrical 2004–2008 (or so) concerns about government surveillance and (somehow) also online copyright enforcement, while the poor multinational monopolies were just innocently caught in the crossfire. I admittedly agreed with it at the time, for the most part, but it definitely overlooked some larger threats to democracy.

I realize that this is a low bar, but in this space, I think that we can agree that V having some respect for his non-technical boss—and not even because of some shady military background—is refreshing.

Interestingly, this is set in a world that has some deliberate diversity to it—“Fida” is primarily an Indian Muslim name, rather than German—but the book thankfully chooses to not draw attention to it.

Let’s just get this out of the way: The opening is infuriatingly detailed on how to operate an iPhone.

Certainly the most frustrating thing about these chapters is that they’re so repetitive. It’s just forty-plus pages, but somehow, we’re told the history of these German data aggregation laws at least four times, and given the same background on M at least three times.

What feels like it magnifies these sorts of problems is that there are also apparent dead ends in the story. For example, we start out by introducing V and Fida’s marriage as non-traditional. Rather than give time to that, however—something that could give our characters some depth—we wring our hands about music company lobbyists or review the list of big-time European hackers again.

Other than the characters, the BZDI (Bundeszentrale für Datenintegration or Federal Center for Data Integration), the dystopian German government surveillance agency, is probably the largest element of the book. It has a specific agenda, technology, and a staff.

The “GirlPhone” also seems original to this book.

Next week, we continue and finish Dünnes Eis.

While we wait for that, what does everybody else think about this half of Dünnes Eis?

Credits: The header image is the book’s cover, and so available under its license.