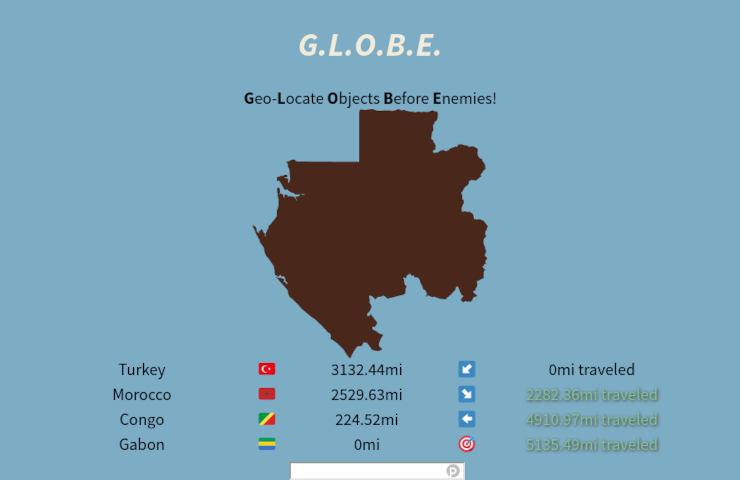 As with last week, this is loosely inspired by the Wordle craze, in that you’re using guesses to zero in on your target. But it’s also a problem in multiple dimensions.

Each turn, you guess a country. The game will tell you how far away the target country sits from your guess, as well as a rough direction. You can guess as many times as you like, though you “lose”—not that you currently win anything—once jumping from guess to guess exceeds the circumference of the Earth.

Is this all too abstract for you? Here’s the game’s narrative that I have in my head.

Your scientists were able to locate an invaluable artifact of historic significance, but someone jammed their signal before they could tell you where to pick them up. The good news is that your agents in every country—and some national territories—received the signal, so you can ask them to give you a direction and distance as you check in with them. You have a travel budget of approximately 25,000 miles, before the agents of E.N.E.M.Y. can snag the artifact for their own collection.

Like I said last week, I wrote this primarily for my personal entertainment, so there’s no state-tracking. There’s no work to prevent the player from cheating. There isn’t even a string of 🟩🟨📗🍏🥬 emoji or other pseudo-text to flood every marginal online social space that you can find. However, if you follow the developer diary posts, you already know that there is source code .

Future versions might add the artifacts to the game, as a prize to receive when the player wins—something like artifact-flag emoji pairs 💎🇹🇬 stashed in the browser’s local storage—though that requires a list of emoji that could be considered artifacts. Similarly, it wouldn’t be out of the question to announce that the player lost the game by having the E.N.E.M.Y. agent 🕵️ (OK, “detective”) nab the artifact first.

Like the Daily Nonogram and Daily Iungimoji, the Daily G.L.O.B.E. updates a bit after midnight, Eastern Time.

Credits: The header image is a screenshot from the game.