About a month ago, I mentioned working on a private project with Inform 7. Among my problems with doing so, the IDE takes enough resources that I can count on the first phase of the compiler—Inform 7 to Inform 6, or “Natural Inform”—to crash my aging laptop about half the time. (I’ll frame this post around dealing with Inform, but the tech tip actually takes on some nice conveniences for shell scripts.) 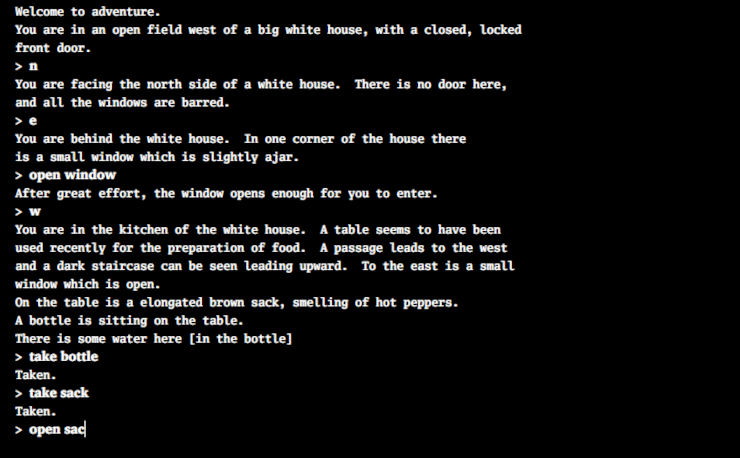 I tried to ignore it. Like I said in that post, the “game” that I worked on mostly amounted as a memory exercise for myself, so I could afford to limit the reasons to compile, waiting until I wanted to try something, rather than confirming that the code still worked.

Eventually, I looked at the build log, and noticed that they show the compiler commands, giving me the thoroughly opaque command-line flags to use on the two compilers. And that gave me the idea of ditching the IDE and running scripts at the command line. I started with the straightforward approach, creating i7.sh and i6.sh single-line scripts with the paths hard-coded. After a few trials, I concluded that the scripts can still crash my system, but such issues became much less common, and I could reduce it further by shutting down unused applications.

And that brought me to iterating on a script to handle the builds completely. Since I haven’t written a “tech tip” post recently, I wanted to walk through this, since writing it led to discovering a few techniques that I’ll probably need again someday, but also probably won’t remember how.

We start with the initialization, with nothing particularly innovative. If you want to use something like this, replace $zmachine with whatever interpreter/emulator that you happen to use. I named the variable after the Z-machine, which I associate with Inform, even though the ecosystem no longer uses it as a default target.

The last piece includes a “trick” that I’ve always used, but probably still worth pointing out: The $# variable contains the number of command-line argument. To make sure that we always have a target folder, then, I set the current folder as a default, then assign the first argument if supplied; -gt stands for “greater than.” I can call the script with inform.sh or inform.sh path/to/game, and it’ll do the right thing, as long as the structure mimics what the Inform IDE creates.

I could—and probably should—find a better way of handling this. However, for the other half of initialization, I move execution to the target folder and find the source file.

I call the name of that file—apparently, only one source file should ever exist—$ni, because Inform 7 started its development with the code name “Natural Inform.” Once I saw that, the name stuck with me better than “Inform 7” has.

We have another condition, here, this one comparing the Inform 7 (“Natural Inform”) input with the first phase’s Inform 6 output. The -nt operator stands for “newer than.” This prevents me from running the compiler if I haven’t made any changes.

I just noticed a flaw, here, that I’ll need to work out: If the compiler output (auto.inf) doesn’t exist, then the condition fails, which seems like exactly the opposite of how I would want this to run. I don’t have a solution yet, because—like I said—I only just discovered this problem.

I copied this almost verbatim from the build log, calling the “first phase” compiler executable with the arguments that work. As mentioned a few weeks ago, I couldn’t find any documentation on those requirements.

When you learn a systems programming language—C, for example—you’ll generally find out that you write the main program as a function, and that function must return a value. A bad class never explains why, just tells you to do it. But we organize things this way, because the UNIX-derived world has a tradition of returning a value to reveal the program’s status when it ended.

A well-behaved program will return zero when it succeeds, and an arbitrary non-zero value to report an error. Since you can use any integer as an error value, a program can even report different errors. To the project’s credit, the Inform compilers do this, so the script can compare the return value—shell scripts expose it with the $? variable, and -ne stands for “not equal”—to zero and, if it didn’t report a success, restore the working folder and exit the script.

If the comparisons look silly, remember that characters like < and > see use as redirection operators, which confuses the parser if you try to use it in the middle of a condition. Instead, we have these operators.

We don’t need to limit ourselves to numbers. We can also compare strings, files—as described above—and even conditions. But we don’t need to think about that, here.

The script then repeats the process for the second phase of compilation. It compares the game file with the Inform 6 intermediate file. If it needs to compile, then it calls the Inform 6 compiler with the arguments used by the IDE. When the compiler exits, we check the status, and exit if it reported an error.

Finally, the script returns to the original working folder and runs the game.

This basically does its job. Distilling the above to the overall execution, the flow looks like this.

This ensures that we never run more than we need, further reducing the chances of crashing my computer.

Credits: The header image is a screenshot of a session of the original (mainframe) version of Zork, released under the MIT No Attribution license.