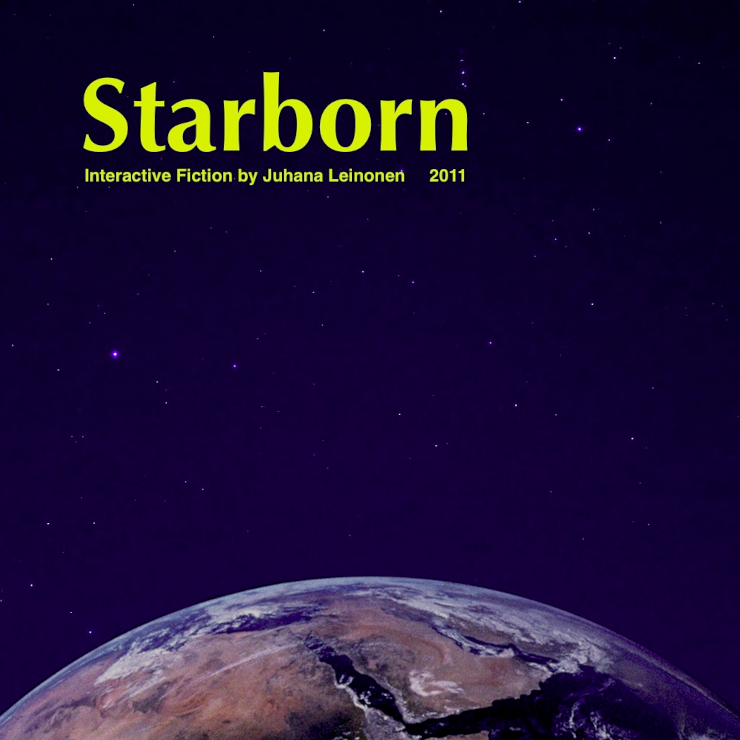 The author describes the game as follows.

A short sci-fi game focusing more on the story than interactivity, Starborn comes in two versions: the Inform 7 uses a keyword interface instead of a full parser, and the Undum version is a Vorple-enhanced story with clickable hyperlinks and multimedia features.

Interestingly, it makes mention of work done by Felix Pleşoianu, whose name you might recall from Collectivity.

Despite the presentation and implementation of Starborn as interactive fiction, I’d call it more of a short hypertext story.

Playing the Game/Reading the Story

You have two options, here, the “traditional” approach that we used for Counterfeit Monkey, and a browser-based multimedia approach.

In either case, you’ll need to download a copy of the GitHub repository. Visit the link, click the green Code button, and pick the approach that you understand.

For the traditional text-based feel, you’ll need an interpreter that supports it. I used Gargoyle, because I already had it installed, though you can find a vaguely recent list of options. If you scroll down to Status of Interpreters, you’ll see links to pages with more information, plus the most recent known release and the systems where you can use the project. If that confuses you, think of the game like a spreadsheet: You can’t work with it directly; you load it into software—the equivalent of the interpreter—to do anything.

Then, in the downloaded repository’s folder, open inform7/Starborn.zblorb from Gargoyle or whatever interpreter that you chose.

If you’d rather avoid typing and/or would like a sparing amount of graphics and sound, skip the interpreter and open undum/index.html from the repository in your favorite web browser.

The story feels nicely atmospheric, to the extent that you quickly get a sense of our protagonist’s family, prior life, and current motivations. We also get a vaguer sense of humanity’s progress and stagnation, in a few lines.

Fans of so-called “hard” science fiction will probably find it gratifying that the interstellar exploration program has some realistic underpinnings, as well as consequences.

For those of you playing through the “Undum” browser version, I’d also point out the pleasant aesthetic choices, there. Especially for such a short work, I have to appreciate that kind of commitment.

The biggest issue that most people will probably run into feels like the weird mode of agency. Because we play the game instead of passively reading it, it makes us complicit in this kid’s technically criminal and literally self-destructive decisions, and it puts us in the position to do that—and only that—after asking us to take the consequences seriously.

While this occurs in many interactive fiction stories and books in general, it feels like a serious cheat to not tell us about the protagonist or their family. We know that the parents took a trip to Epsilon Eridani, and the lack of results (“just some rocks and gas planets”) and the ship’s name suggest that they might have made the trip for exploratory reasons, despite the mother’s pregnancy. And yet, nobody pays any mind to the first and possibly only child born during interstellar travel, and nothing in the story mentions the parents or doctor having any cultural prominence.

After more than a decade, I see Leinonen consistently active on GitHub, but the game has only seen one moment of activity three years ago, and that only fixes an image in the browser version. I also don’t see any activity on their blog in the last six years.

Assuming that I interpret the trip to Epsilon Eridani correctly, then we have the historically important ship Magellan and its doctor Strepke, plus Foucault Station—presumably referencing Léon Foucault, for his work in verifying the Earth’s shape—as Earth’s orbiting space-port.

As a change of pace, for next week, we’ll look at the poetry of Ke’Aun Charles.

As a reminder, while I feel lucky to have stumbled across the last few items—yes, even The Banjo Players Must Die, much as I complained about it—I mostly ran out of items on my list a while ago. Therefore, I’d like to put up the signal for recommendations, again. For those who haven’t seen it before, I keep the requirements to a minimum.

While we wait for that, what did everybody else think about Starborn?

Credits: The header image is the game’s cover, released under the same license.