Farms with diverse crops protect animals and the climate from Futurity

But in the diversified systems the researchers studied, the endangered birds can be found year after year.

Wishes which cannot be fulfilled are said to be “pious.” It is assumed, apparently, that only profane wishes are fulfilled.

Donald Trump Says America’s Ventilator Shortage Was “Unforeseen.” Nothing Could Be Further From the Truth. from The Intercept

Almost every federal agency you can imagine has, in fact, warned about shortages—and some have offered specific and sobering estimates of need…

One may as well preach a respectable mythology as anything else.

…not an exaggeration to say that for every avoidable death that we allow as a society in favor of financial gains, we are actively choosing to literally drown a human being in their own blood.

An ignorant doctor is the aide-de-camp of death. 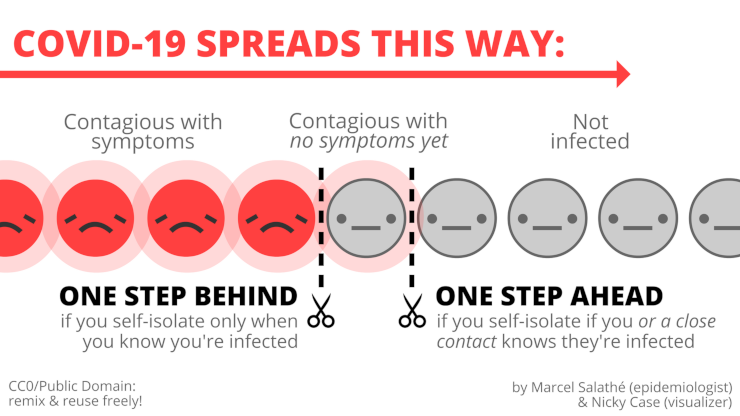 One Step Ahead from Nicky Case

Alas, people are contagious before showing symptoms! We’re one step behind the virus.

If you only read one out of the six articles, here, this should be the one. It’s also the shortest and has the most pictures!

Kings can tolerate everything but three practices—revealing a secret, an outrage on his harem, or a blow aimed at his power.

the game was already important enough to people in the highlands to occupy a prominent place in the city and justify the investment of resources it took to build a stone court.

A community which is inspired by feelings of ill-will towards other communities is low and ignoble.

Big Oil is cheap: Should the government take it over? from Fast Company

When the group ran the numbers in 2015, it would have cost more than $1.1 trillion to buy 25 coal, oil, and gas companies. Now, to buy out the entire sector would cost around $700 billion, she says. That’s for 100% ownership; the government could also spend less to take a 51% ownership and gain control.

Credits: Header image is Circular diagrams showing the division of the day and of the week from a manuscript drafted during the Carolingian Dynasty.