This week, our Free Culture Book Club digs into the first of the Blender Foundation’s Open Movie Projects, Elephants Dream, code-named Orange, for people who care about such things. 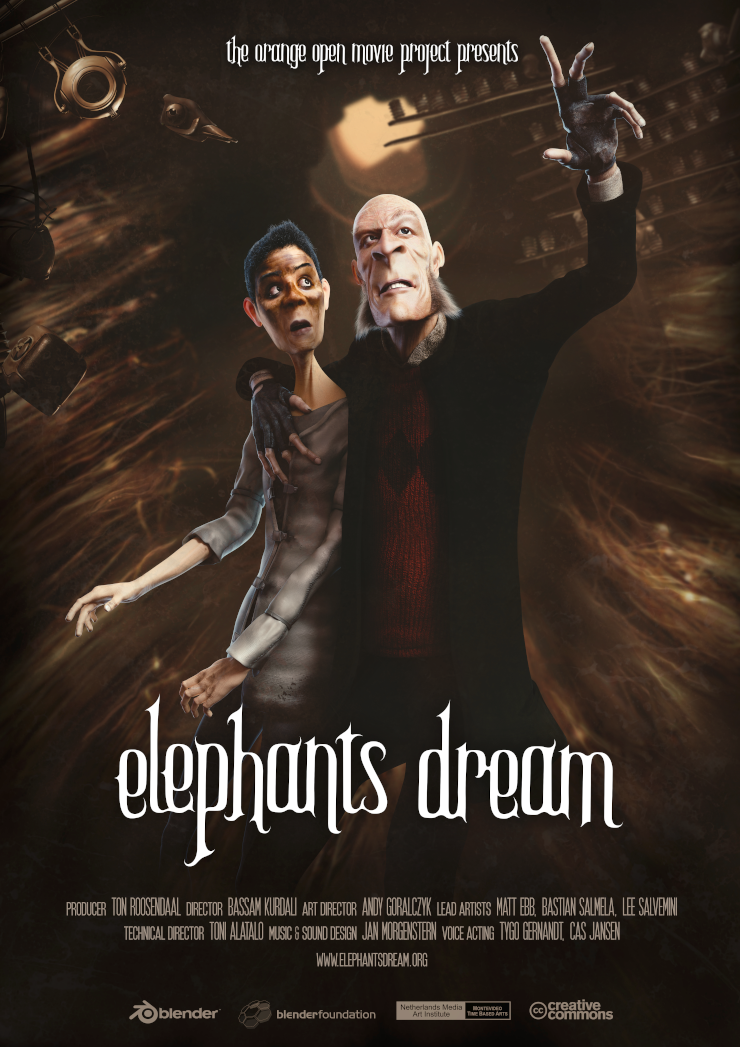 If you haven’t already seen it, here it is.

I know that this was an introduction to both the Blender software and Free Culture.

The visuals are stunning, from the weird geography to the various robots. Even the human characters mostly avoid the uncanny valley in their cartoonish features. It’s a literal showcase for 3D animation, though, so that shouldn’t be too surprising.

There’s also a world where reality can be twisted by intention, whether or not the individual maintainers (are they maintainers?) actually believe that the reality is at all flexible.

At least to me—maybe I’m just too dim to fully enjoy something like this—the plot feels thin to the point of incoherence. We have no idea who these characters are, why Proog cares whether Emo believes in the machine, or even what the machine does. The goal of the movie is definitely more about the visuals than the story, though.

The project has been complete for fourteen years, so there probably isn’t much room to participate in the project, beyond remaking or extending it. However, the Blender Foundation makes these sorts of projects happen semi-regularly. To fund this work, they sell merchandise and a subscription service that includes the digital assets to all the movies (and more), books, and training courses.

The Blender Open Projects are unique in that they release everything for their movies. After fourteen years, it’s harder to find the files outside of the archive on Blender Cloud, which is a subscription service. If you want the 3D models, script, audio, sound effects, and so forth, it might be worth paying the €9.90 ($11.50USD, at the moment) for a month or two to save yourself the trouble of hunting down the specific pieces that interest you.

To make changes, you would need to learn Blender (both Wikibooks and Floos Manuals have decent books Free Culture on the subject), but if you want to rewrite the script (and re-record the dialogue) or spin off those robot birds into a new movie, that’s something you can do. If you’re ambitious enough to build a sequel, that’s also possible.

We’ll try some prose, next time, looking at the introductory Ascension Epoch short story, Won’t You Come In?. Sign up for their mailing list to get a copy.

While we put off the first actual reading for our book club, does anybody have opinions on Elephants Dream? Anybody figure out what the heck it’s about…?

Credits: The header image is Elephants Dream’s official movie poster, made available under the same CC-BY 2.5 license as the remainder of the series.