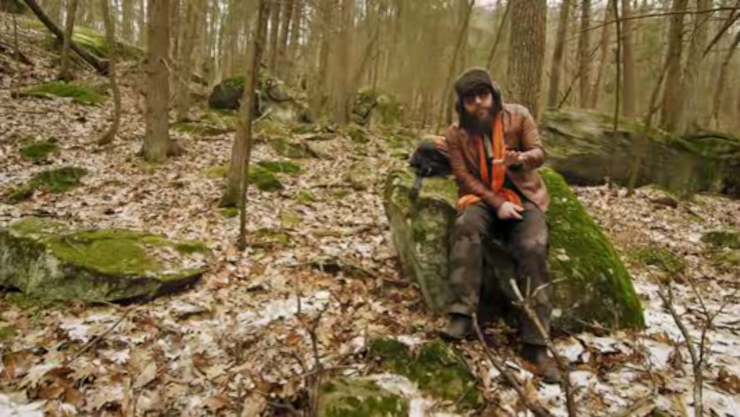 Here’s blurb for the film.

When his reputation as the most famous and trusted TV survival host in the world is tarnished following allegations that his show is staged, Tex Montana attempts to clear his name by documenting himself surviving in the remote wilderness for thirty days, completely alone.

In any case, if you haven’t already watched the movie, here’s your chance, before we get started. Be warned—if the content advisories didn’t sink in—it’s probably not something to have on in polite company with the sound up.

This seems like exactly the sort of Kickstarter campaign that I would have pledged to and then forgotten about until recently. However, I didn’t see the campaign at all, until my most recent search for possible books/films/games to talk about, here.

The entire survival show concept is delightfully over the top—I almost wish that we had gotten an episode of the series—from the introduction involving a gigantic pickup truck and multiple Goldie Hawns to Tex’s innovative approach to survival to the incomprehensible rants.

The photography is beautiful, similarly, maybe surprisingly so, given that this film doesn’t always seem to be carefully crafted. It’s hard to think of a scene that isn’t well-staged both to help tell the story and also to look great.

Tex’s multiple layers of persona are at least mildly amusing, and I wish more had been done with that idea. Actually, many of the jokes about the Tex Montana identity are clever in unexpected ways.

Playing Tex’s abusive relationship with his editor Amanda for laughs is fairly unfortunate. It might be possible to make that funny by keeping the frame on Tex being in the wrong and giving Amanda some agency, but the script doesn’t seem to care about that. There’s a confession that she has basically been extorted into a relationship with the boss, and…that’s the entire joke. Or, rather, that’s one callback among several to the original “joke” that Amanda is constantly abused and handed emotional labor to do, under threat of firing.

Similarly, there are extended sequences that seem to exist to annoy and alienate the audience. Granted, this is an aesthetic choice where the reception depends on the viewer’s sense of humor, but a lot of this still seems like it would be a hard sell, with a lot of it feeling like filler, because this film runs for a long eighty minutes.

I’m also going to say that the ending feels like a cop-out. The script sets up multiple resolutions that would provide different degrees of satisfaction that might pay off different parts of the story, but apparently isn’t interested in any of them as much as it’s interested in making sure that the story comes to a halt. Or, rather, it feels like the writers couldn’t see a route to redeeming Tex instantly, to the point that making him expendable was easier.

Obviously, Tex Montana Will Survive—presumably without the exclamation point—an exaggerated eight-season survivalist show hosted by a masculinity-obsessed dolt who actually just follows directions for each shot of the show, seems like the sort of imagined product worth reuse.

Next week, since I flubbed the previous attempt at covering a superhero comic, we’ll try again with Homem-Grilo, a Brazilian web-comic in Portuguese. I don’t know any Portuguese, so this should be an adventure of its own, and I hope online translators are up to the task…

While we wait for that, what does everybody else think about Tex Montana Will Survive!?

Credits: The header image is a frame extracted from the film, and so is under its license.