This week, our Free Culture Book Club reads the first quarter of The Banjo Players Must Die. 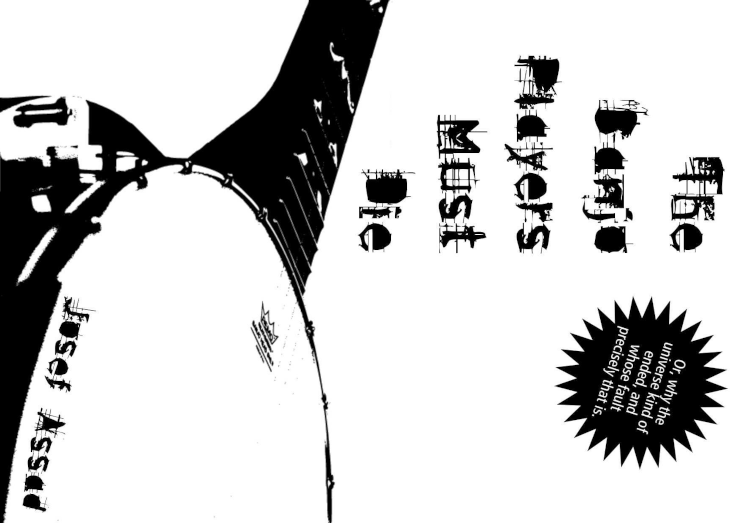 I’ll warn readers to review the content advisories again, on this one. The book especially treats sexual assault casually without any clear reason. I hesitated to read and/or cover this at all, honestly, because the book definitely wants to shock people.

At its best, the book wears its inspirations on its sleeve. In a different context that had more of an eye towards satire, and with a more organized structure, the asides could feel like they came from someone like Douglas Adams.

Tastes vary, of course, but I also find the overall concept of this section—the bureaucracy of and reactionary values of Heaven putting it in increasingly absurd situations when planning the end of the world—fairly amusing. I assume that one could draw something of an allegory with how fundamentalists from every religion quickly ally themselves with the worst of humanity, though I’ll heave the details to someone more enamored with this book to work out.

I also have to admit that, while the subject matter outright pushes me away, once I forced myself to put in the time reading the book, the two chapters moved fairly quickly.

And I just noticed that the author released the book to GitHub in 2012, which seems like a nice touch, given its release exactly two months before that alleged end of the world.

Playing up the awful nature of the protagonist feels awful, not least because the text clearly wants us to find animal abuse and disregard for the life of a woman funny. I can almost see the purpose in doing so, but the joy that it takes in illustrating cruelty and in the reader’s anticipated disgust feels more like a twelve-year-old wrote it after guessing the PIN to watch South Park than anything else. While I realize that many might see that as a positive trait, to me, it just feels like I’ve seen it all before.

I alluded to this before, but I also feel like this part of the story could stand some better organization. The book tells the story of a man who becomes a prophet, with pieces out of order, then it jumps to angel antics to need and then select a prophet, and I just feel like those could have combined to tell a story where things didn’t feel obvious.

While I wouldn’t guess who would find it useful, the book supplies us with a fairly dense timeline from today until 2508, the twenty-fifth century rock band Intergalactic Hamburger Purveyors of Doom, the Dictionarium Aegyptum, several prophets of “the Acopalypse,” and a unique (if somewhat tiring) cosmic order. I suppose that we also have the universal unit of currency, drugged out and absolutely drunk parakeets and the Intergalactic Hamburger Purveyors of Doom.

Next week, we continue The Banjo Players Must Die, from Chapters 3 (Of Faith and Reason) to 4 (When the Food Cushions Attack).