This week, our Free Culture Book Club watches the first quarter of the episodes of Where Are the Joneses, an early scripted comedy web series. 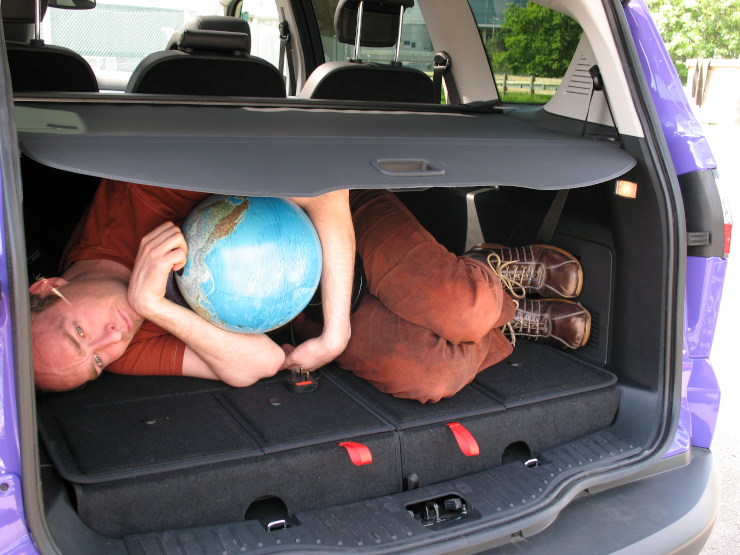 Here’s how they have described the project.

If you haven’t already watched it, here’s the first episode to help you catch up!

I can’t find the specific reference, but I vaguely remember that the series was loosely inspired by a contemporary news item about a woman who did find her half-siblings. I assume that her trip wasn’t this funny.

Dawn’s oblivious ego feels like a better-realized character out of the gate than most sitcom characters. And the writers (and Emma Fryer as Dawn) manage to sell the character and the show’s premise in the first three minutes.

The tour of “British landmarks” is at least my sense of humor, as is “Roman Day.”

The short format also works very well in keeping the story from meandering or allowing a joke to go on further than it needs to.

As mentioned last week, Where Are the Joneses? is almost certainly one of Free Culture’s biggest success stories, in that it had a funding model (sponsorship and product placement), a significant volume of output (at least five hours of videos), and a lot of the development was done in the open with input and feedback from the community, some of that interaction still preserved. It was successful enough that, while the funding apparently never came together, it inspired Ridley Scott to pitch his “Purefold” web series, to be released in short vignettes under a CC-BY-SA license. That’s right. Because of Dawn and Ian, we nearly got “open source Blade Runner.”

Like any comedy, some jokes don’t land, such as the extended screaming about asthma.

The audio is occasionally a bit muddy, too, but that’s not atypical for early Internet video filmed outdoors. If you’re a video purist, you might also object to the low resolution, too, though I don’t think there are any points where it interferes with comprehension of the story.

There probably isn’t any likely involvement, anymore. The show ended over thirteen years ago and the only evidence of it remaining is on third-party servers, like the Wikidot forum linked above and their YouTube account .

I have not checked the Facebook community, but I assume that has also fallen into disrepair, as well.

These twenty-three episodes primarily supply us with Dawn Jones and Ian Wallach/Jones. The Man in the Windmill providing diegetic music also shows up near the end. And it appears that their documentary-maker is named Jonti Bloom.

If recycling any of the footage, though, be mindful of copyrighted material and trademarks in the backgrounds. For example, Dawn’s Ford S-Max is as much a character as most of the humans we’ll meet, but the automotive giant might not be pleased with your sequel where the purple car is used in a series of crimes. Likewise, the war gaming shop that Ian and his (non-biological) father manage, Modellers Loft, is a real store that is not owned by a man afraid of his own shadow and his armor-wearing father.

That said, if anybody wants to make Ian’s dream come true and adapt this into a biopic where Danny Glover plays him, I’ll be first in line to watch it.

Next week, we forge ahead with the next quarter (twenty-three episodes) of Where are the Joneses?, from The Honorable Logg to A Streetcar Named…, as the mystery of Cherry Lodojo deepens. If you reach Jonti’s Dilemma, you’ve gone too far.

Credits: The header image is Ian Jones stows away in Dawn’s S-Max by The Joneses, a publicity shot for the show released under the terms of the Creative Commons Attribution Share-Alike 2.0 Generic license.